Have you ever dreamed that you can fly? Turn this fantasy into a real experience!

From the first documented flight of history (Wright, 1903) until the first paratrike flight many intrepid have been interested in recreating the flight of birds. Thanks to these visionaries anyone today can fly and conquer the sky.

Throughout the twentieth century we have made great strides in sky science. And every time new forms of flying and artillery arise, that allows us to plan following the air currents as the birds do.

Before choosing the mode of flight that you want to practise it is important that you know the difference between a flight with motor and without motor. Always keep in mind that none of them can be compared to a traditional flight with an airline.

The terminology of adventure sports is confusing to non-hobbyists. This is why, in this article, we will highlight what are the main difference between the hang glider, the paraglider, the paramotor and the paratrike.

Is flying with hang gliders the same as a paragliding? Although it's a different flight modus they do share the same characteristics. Both devices are based on the handling of a flexible sail and the absence of an injection engine that drives them. In other words, both are fixed-wings aircraft capable of sustaining themselves. They are also known as aerodynamics.

In a flight with delta wings the pilot uses a mechanism composed by a sail of fabric that is subject to a metallic structure. Underneath this sail and over the metal structure is placed the pilot, who handles the drafts. With the hang glider a take-off can be done from a hillside or flat. In addition it allows to lengthen the hours of a flight as much as the pilot can hold.

Another instrument used for non-powered flights is paragliding. This term comes from the acronym composed of two French words, we refer to the words: "Parachute" and "pente" (slope). The origin of the paraglider is with those mountaineers who, passionate about crowning the highest peaks in the world, devised a way to descend from the mountains by flying. From these arises this modality of flight. In paragliding the sail is also flexible and its size will depend on the number of people on board (one or two participants maximum). During the descent the sail fills with air and forms an aerial chamber with enough force to support the paraglider.

The devices that are used to make motor flights have evolved from the uses that the pilots made of the paraglider. The grace is in how these contraptions emerge. There were some paragliding inventors who wanted to practise take-off on foot instead of flying off a mountain. Thus arises the paramotor. 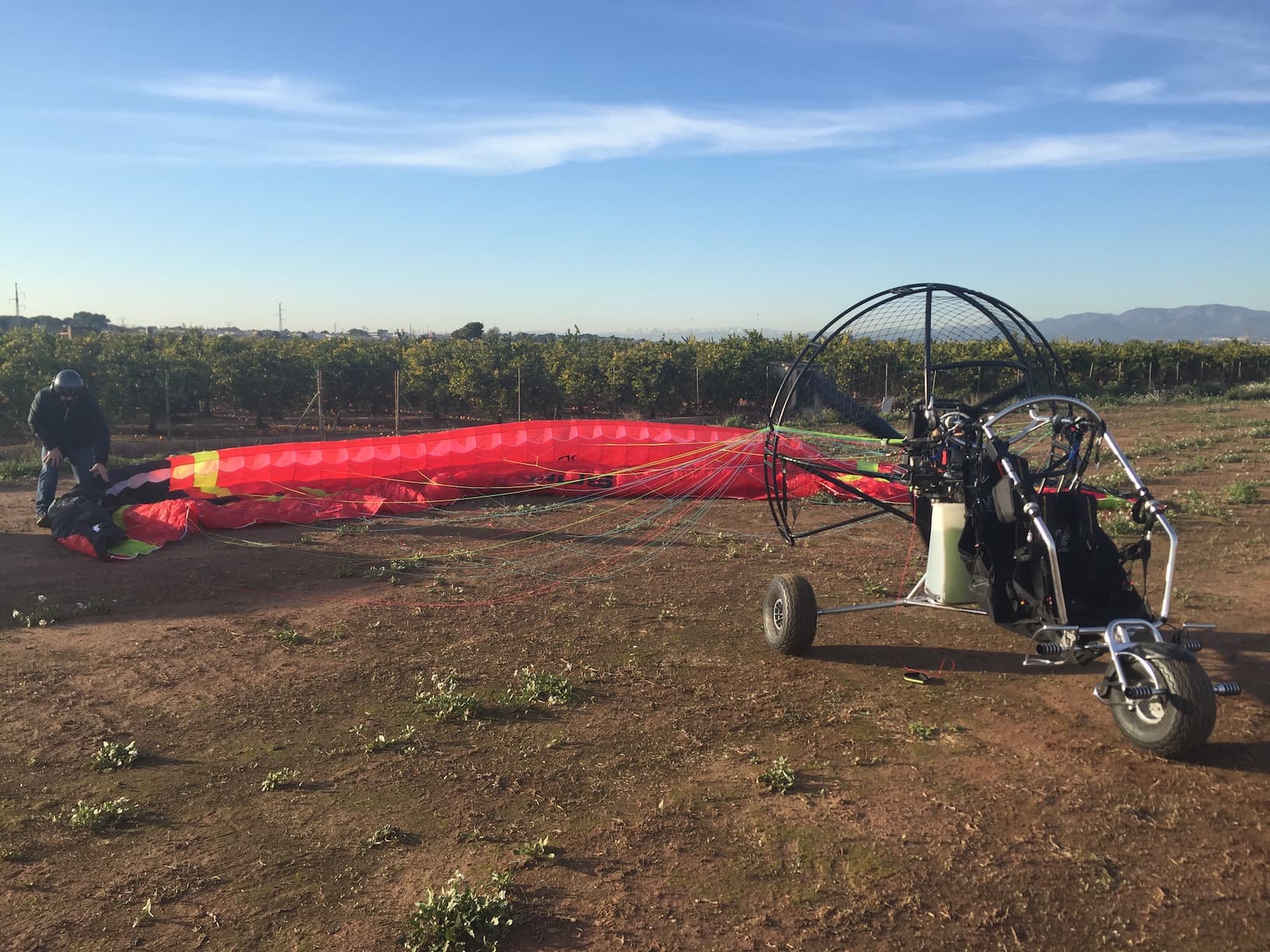 The paramotor is composed of a propeller motor placed on the back of the pilot in addition to the paraglider itself. This contraption is nothing more than a motorized paraglider. In the paramotor the speed is obtained thanks to the wind generated in the initial race that the pilot realizes by a flat terrain. The engine acceleration speed is added to this force. You also have to take into account the type of sail. Normally the same sail that is used in a free flight with paragliding can be used although there are also special sails that are made for this motorized flights.

Since someone added a propeller motor to the paraglider, it was a few years before some amateur, tired of running down the slopes to take off, managed to put the propeller on a chart of wheels. Thus arise the flight in paratrike.

The paratrike cart can have two, three or four wheels. In our case, we have designed a custom metal structure with three wheels that supports the propeller motor. With this invention, greater control has been achieved in take-off and landing. In addition, the structure has two seats (one behind the other), which allows us to make flights with an extra companion.

What is a paratrike flight?

It is an unique experience that will allow you to enjoy the most beautiful aerial landscapes of Valencia. After the take-off between fields of orange trees, the paratrike begins to rise until he reach a height of 1.000 meters. From this position we will glimpse the crops, the beaches and the mountains that are in each municipal term of Valencia. This adventure takes about half an hour. At the time off the flight you can choose between two different destinations: fly over Garbi and the Segart Spring or go to Massafassar to touch the waves and the breakwater of the beaches. The landing point is the same as the starting point. It is a transcendent experience that you will remember your whole life. Not every day you can fly and contemplate the 360 degrees of the horizon as a bird.